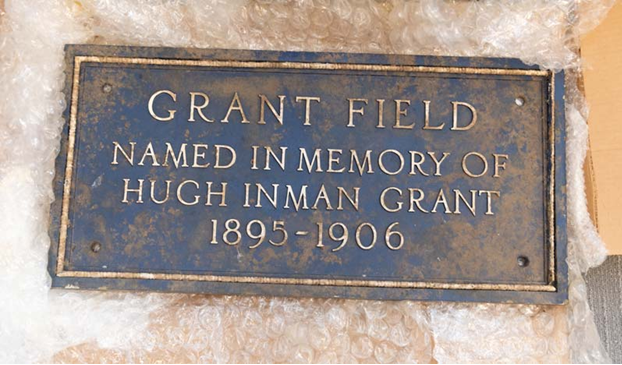 In October of this year, a very heavy package, wrapped neatly in brown paper and sent from fictitious student George P. Burdell who had been officially enrolled at Tech in 1927 as a practical joke, was delivered to Dean John Stein in the Student Services Building at Georgia Tech. Stein carried the heavy package to his office, and contemplated whether to open it.

“When we finally did, we discovered a plaque that seems to have been mounted on a wall at Grant Field back in the day,” said Stein, vice president for Student Life and the Brandt-Fritz Dean of Students Chair. “I was amazed because it looks like it has remained intact since the day “they” dismantled it. The original dirt is still on it, and it seems preserved in time. It was truly unbelievable.”

After some calling around, Stein was only able to find out that the sender wished to remain anonymous and that it was a man in his 60’s meaning, the plaque was most likely taken some 40 years ago.

Stein added, “I don’t believe this is bizarre. It’s unique to Georgia Tech. There is a Georgia Tech tradition of ‘taking’ or ‘borrowing’ things. It’s just part of the lore of the place. I don’t know when and why it started, but it continues today. We still deal with things being taken, but hopefully temporarily. It’s nice to get them back.”